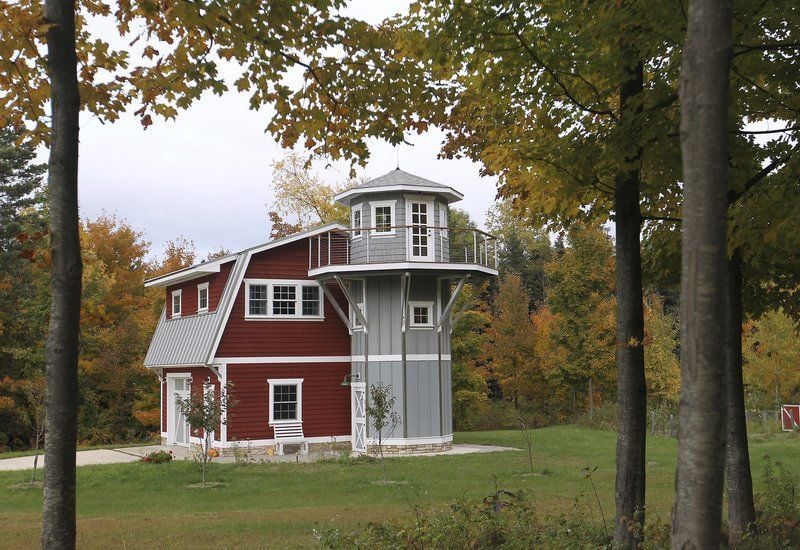 Jim Gibson and his wife Marzena Frye-Gibson live in a home near Frankfort designed to look like a barn and silo with about 600 square feet of living space. 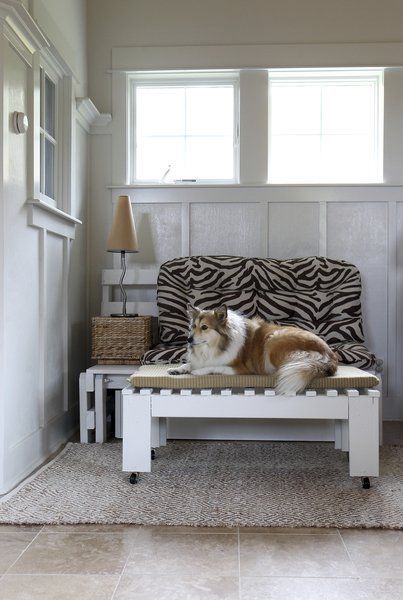 Record-Eagle/Jan-Michael StumpKleeya sits in one of her favorite spots inside the home, which is designed to look like a barn and silo with about 600 square feet of living space. 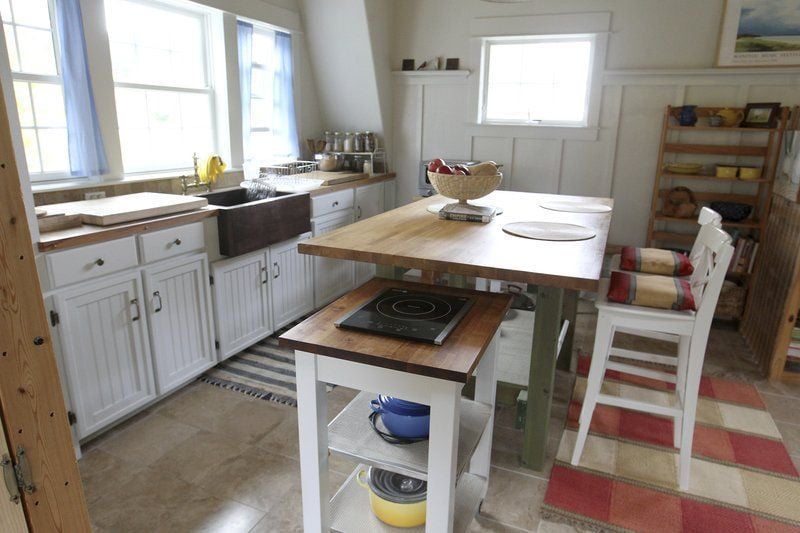 Shelves that roll out from the kitchen table hold kitchen ware and induction burners used to cook instead of a stove top in the home. 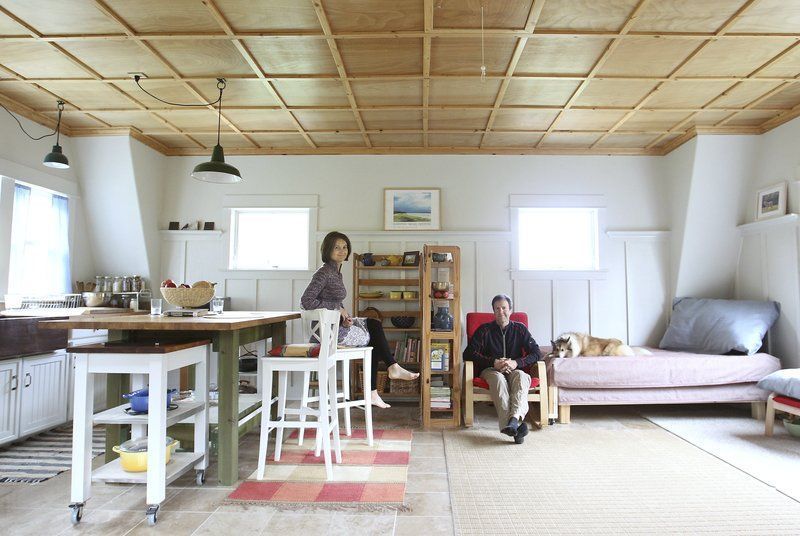 Jim Gibson and his wife Marzena Frye-Gibson live in a home near Frankfort designed to look like a barn and silo with about 600 square feet of living space.

Record-Eagle/Jan-Michael StumpKleeya sits in one of her favorite spots inside the home, which is designed to look like a barn and silo with about 600 square feet of living space.

Shelves that roll out from the kitchen table hold kitchen ware and induction burners used to cook instead of a stove top in the home.

TRAVERSE CITY, Mich. — Jim Gibson became a convert to the small house movement partly by accident and partly by design.

His one-bed, 1.5-bath home in Frankfort, south of Elberta, Michigan features a 24.5-by-24.5-foot footprint with just 600 square feet of living space. The house, which he shares with wife Marzena Frye-Gibson and their dog, Kleeya, is designed to resemble a barn with a silo.

The unique look often draws the attention of passers-by, who sometimes pull off the road for a closer take.

“I was actually surprised at first,” said Gibson, a Muskegon native who returned to northern Michigan in 2007 after going away to college in California and staying for awhile. “A lot of people stop by, take pictures. We’ve even had UPS people take pictures.”

Gibson, a design engineer who specializes in medical products and research equipment, designed the house using his imagination and a CAD or computer aided design system. But it started with a $25 online plan for a garage apartment.

“I hadn’t committed to living in Michigan so it was just going to be a garage and studio,” said Gibson, who envisioned a separate house to the south someday. “The property was planted with Austrian pines 30 or 40 years ago. Then I found out it used to be pastures and farmland. I thought, ‘Why not make it a barn-looking garage?’”

About the same time he met Marzena, a Polish-born Chicago resident who was visiting in the area. Their budding relationship helped convince him to stay and to turn the garage apartment into a house. A few months into construction, he added a silo to gain a loftier vantage point.

“I climbed a tree to see what kind of view the house would have and then decided I wanted a tower a little higher than the rest of the house,” Gibson said.

He hired subcontractors and worked with them side-by-side. The couple moved in in 2009 but the house still is a work in progress, he said.

The home’s exterior features a cedar-stained red “barn” with galvanized steel roof and a single garage door designed to look like barn doors. The attached “silo” is stained gray, with cedar shingles at the top. The entire foundation boasts a fieldstone façade.

A two-car garage on the lower level shares space with stairs that lead up through the silo to a small landing from which visitors can enter the second-story great room or climb up to the silo “tower” via a fixed-wall ladder. At the very top: a small room that, in warm weather, can be used as an office or meditation room, and a nearly wraparound deck with cable railing Gibson designed from hang glider cable. Both feature a scenic view of the Elberta bluff, Betsie Bay and, at night, the lights of Frankfort.

Gibson bought the 5-acre property in the early 1990s because of its proximity to the bluff. The 370-foot-high, 3-mile-long sand dune is the main flying site for members of the Green Point Flyers Association, a hang gliding and paragliding club.

It’s where Gibson, who learned to hang glide at 16, met Marzena in 2008. He was checking the weather, she was visiting with friends.

The couple’s small house offers just enough space to keep them together while allowing for separate pursuits. In the great room, shelving units divide the kitchen and dining space from the bedroom space, where trundle beds convert to a sitting area by day. A bathroom wall helps form a cozy living room nook.

The kitchen is dominated by a large hardwood-topped island that, with stools, doubles as a table. Two Ikea kitchen carts with induction cooktops store under either end of the table and roll out when needed.

“We love to cook. This gives us a lot of space for doing that,” said Frye-Gibson, a former English teacher who now works as an online translator and senior caregiver.

The great room’s coffered ceiling of finished plywood is Gibson’s own design. A fold-down ladder leads to a small attic storage space with skylights, above, where Gibson’s nieces and nephews love to sleep. Double hung, casement and fixed windows let in plenty of light

Gibson designed the house to be cost and energy-efficient, with radiant floor heating and all-electric energy.

“Once I started building, I got more and more into small and efficient,” he said, adding that he turned shelving units into slender-profile storage cupboards by adding doors and tops. “I was always a renter in California so I didn’t need much space.”

The compact space also keeps the couple from collecting too much and can be easily managed and maintained, Frye-Gibson said.

“I lived in Europe so I grew up that way,” she said. “Your bedroom turns into something else. That’s why I don’t mind living in a small space.”

The space also can be easily reconfigured when the urge strikes, she said.

“We move things around a lot. Every six months there are changes.”

Frye-Gibson spent summers and weekends on her grandparents’ farm while growing up in Poland. Now she and Gibson are slowly turning their land into a farm, too. Currently it boasts blueberries, saskatoons, pear and cherry trees, a garden and a sunflower patch. A hiking and mountain biking trail leads through the woods.

The couple even jokes about getting goats so that Kleeya, a Shetland Sheepdog and American Eskimo cross called an Eskland, can nurture her herding instincts.

Gibson said there are things he’d have done differently while building the house, like heat the silo. But overall, the couple are thrilled with the result

This story provided by The Traverse City Record-Eagle.