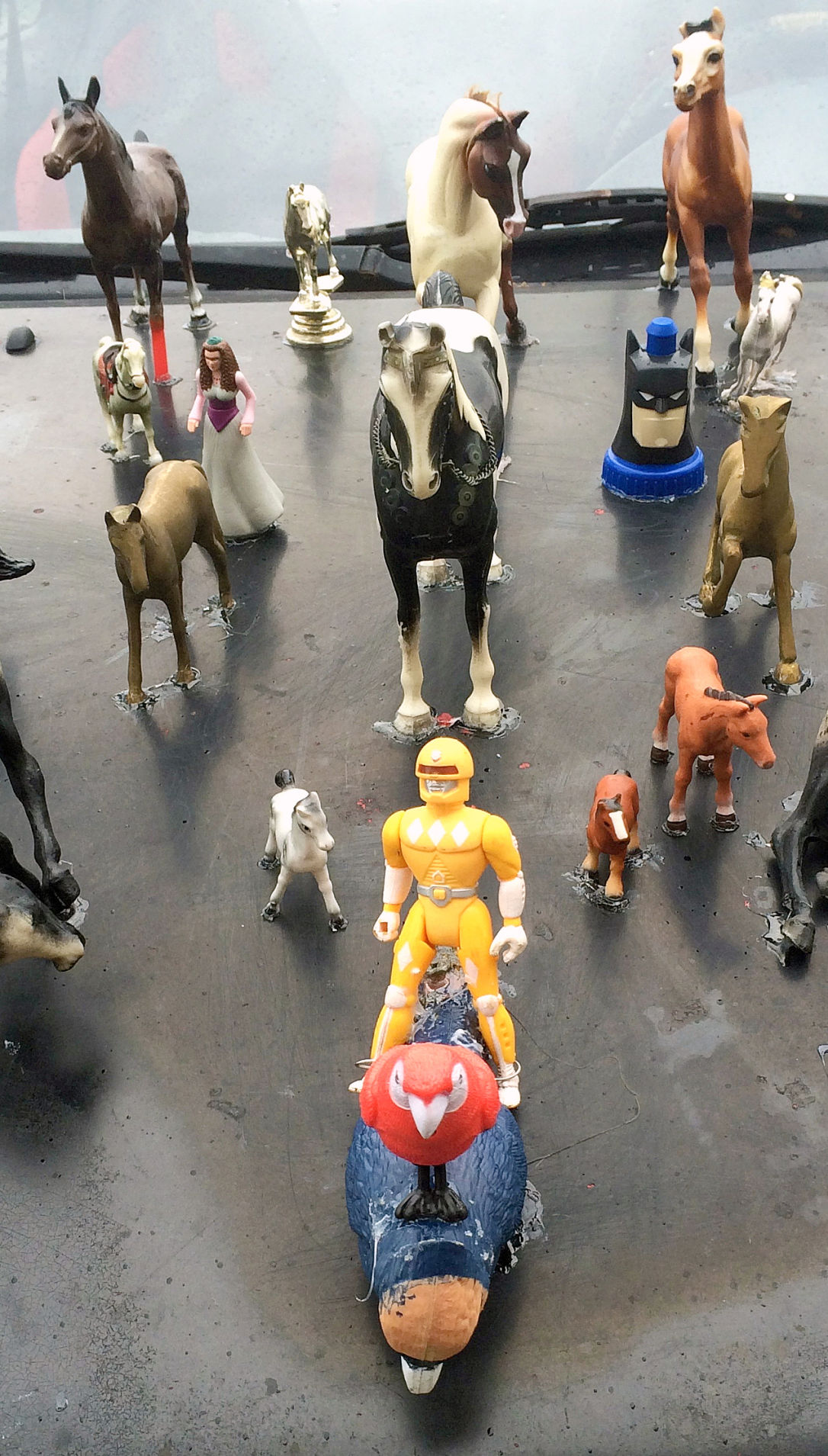 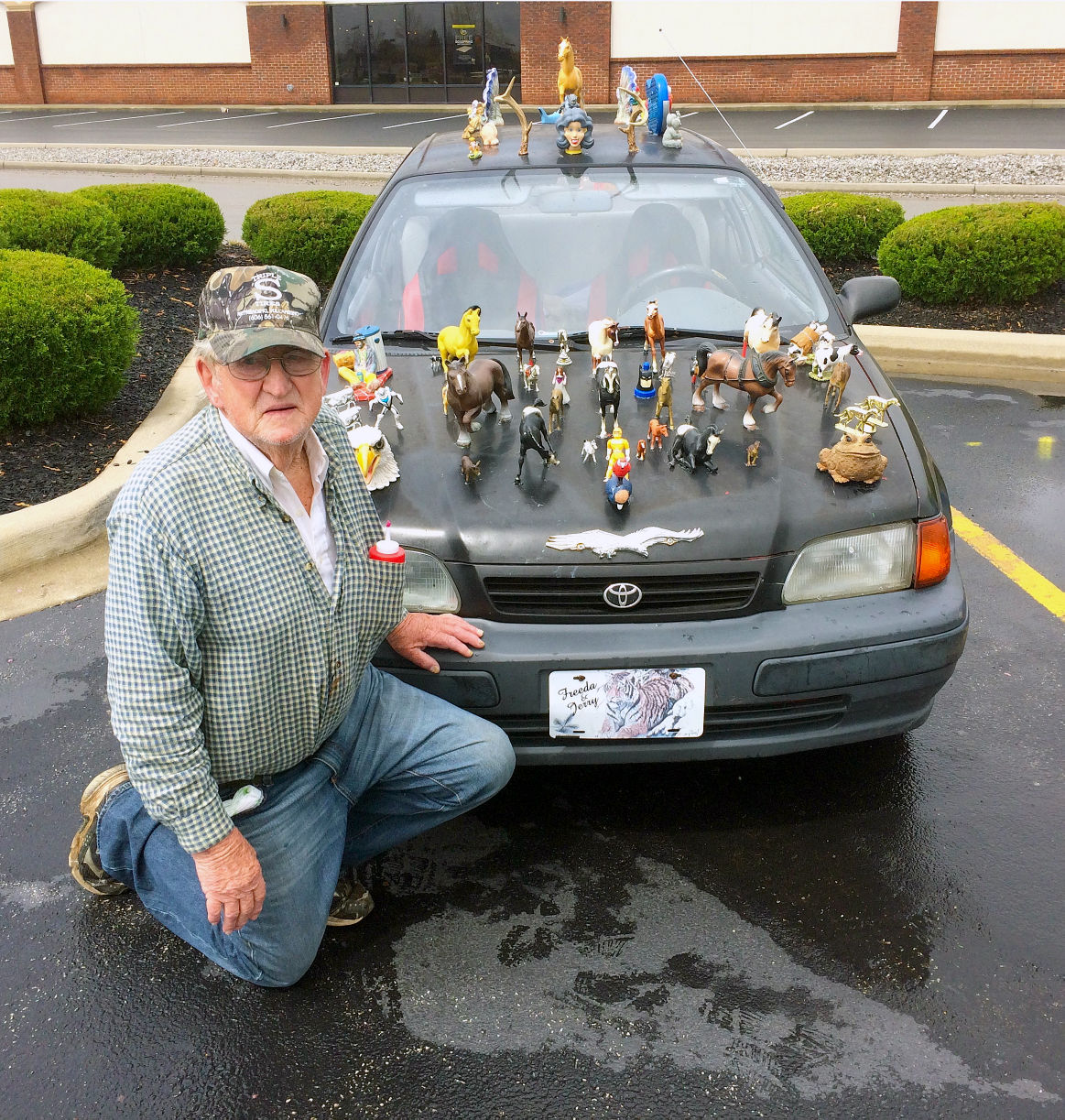 Glued to the once-black-but-faded-to-dull-gray 1995 Toyota Tercel is a menagerie of plastic animals, toys and knick-knacks of all descriptions.

It was only a month ago that he started his “art car,” as it’s called in more posh circles. And he has been continuously adding to his “work in progress” ever since.

During his working days, Grider operated truck stops. Now long-retired, he lives alone in Somerset, having lost his wife, Jewell, about two years ago.

He manages to keep busy bending the ear of any willing listener with a mix of folklore and tall tales, along with an occasional prank. However, it’s obvious that the apple of his eye is his Tercel — or perhaps the attention it generates.

“When I grew up, all the cars and trucks had hood ornaments, and I really missed them on these new cars," he said.

With the sun-faded hood of his Tercel a blank canvas, Grider decided to create his own hood ornament, and affixed a toy parrot to its front.

But not just any parrot.

Grider’s parrot has a battery-powered proximity sensor that detects the presence of passersby, and then startles them with an audible “Polly wants a cracker.”

Not one to leave well enough along, Grider decided to give his squawking parrot a rider in the form of a bright yellow Power Ranger figurine.

The rest is history.

“I only use the automotive Goop glue — it sticks stuff down good ... I never worry about anything blowing off," he said.

To back up his Ranger-saddled parrot, Grider added a corral full of horses of all shapes and sizes to the Tercel hood. In fact, his affinity for horses is evident by the prancing Palomino that has center stage on the roof flanked by two scallop shells and a pair of antlers from some “deerly” departed whitetail enforcing the old adage that “the buck stops here.”

Today the Tercel is festooned with a hobo clown, cows, a bald eagle head, Batman, a wart-encrusted frog, a broody hen with chick, a tiger, scorpion, Saint Nick ... and a bobble-headed turtle.

For motorists unfortunate enough to get stuck behind Grider, life-like movements of that latter crusty bobbling tortoise have had a mesmerizing effect.

“Some people have actually stopped me to ask if it’s real,” Grider said, a smile crossing his weathered face.

And as somewhat a surprise, Grider has even had inquiries from collectors interested in buying the vintage Teenage Mutant Ninja Turtle figurine that has center place on the trunk directly behind a nesting chicken that stands watch behind.

Nowadays Grider even has fans stop and offer him trinkets to add to his whimsical collection. And all contributions are welcome.

But Grider admits a clandestine motive behind the baubles bedecking his ride.

“I’m hoping to attract me a vegetarian woman,” he grins. “With the price of beef today, that’s all I can afford.”

Ken Shmidheiser writes for the Commonwealth Journal in Somerset, Ky.