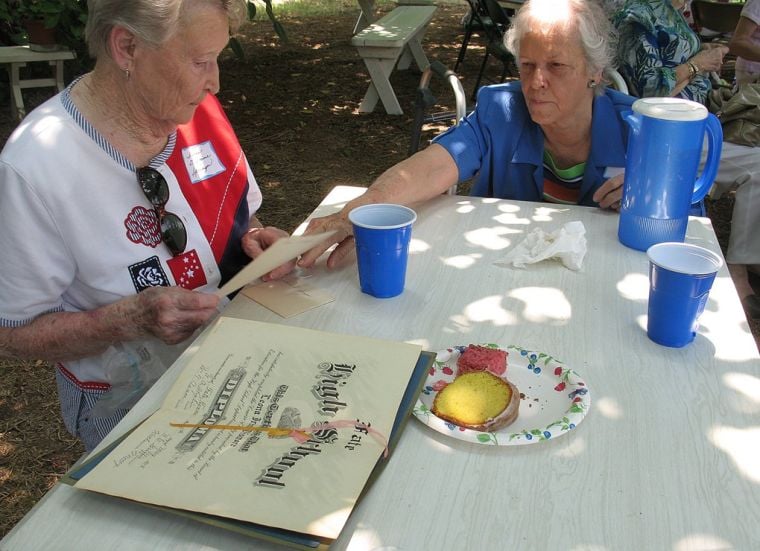 Irene Springer, at left, shares her 1928 high school diploma and other memorabilia with Maxine Crawford Costello. 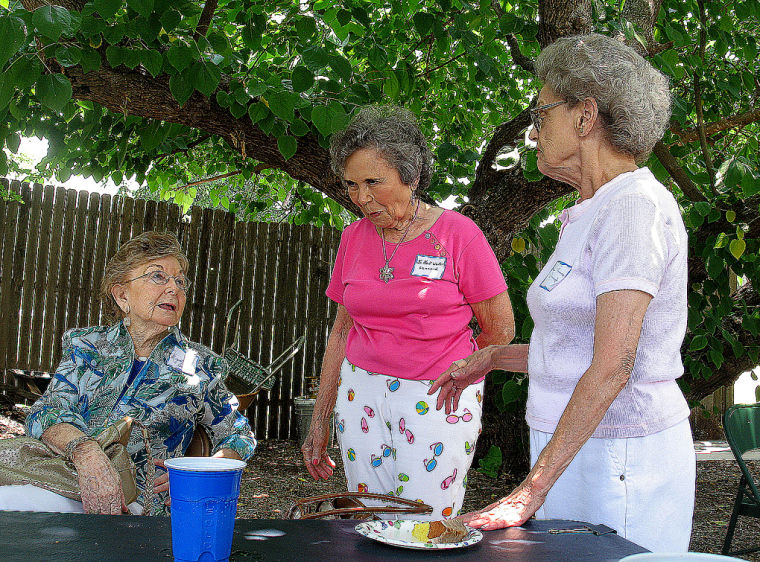 Irene Springer, at left, shares her 1928 high school diploma and other memorabilia with Maxine Crawford Costello.

On June 13 a gathering of old friends took place over a noon feast of fried catfish at the home of Jo Leonard in Fate. All had one thing in common: they were former students of a school district that no longer exists, the Fate school. At one time Fate had its own school district, that included first through 11th grades. There was a Fate High School football team, as well as other sports. There were plays, socials, and Parent Teacher Associations, all of which are now just memories. “I graduated from Fate in 1928,” said Irene Springer, the oldest former student attending who is in her 90s. She graduated when high school in Fate went through the 10th grade. “I started there in the fourth grade. Before that, I went to school in the country, in Nadine. “There were usually four grades in each room, three in some. It was just fun. Of course I knew everyone. “My father always lived in this area. My daughter was born in 1935 and began to go to school here in 1940.” Fate had seen a decline in population after the cotton trade began to drop, which caused the school’s population to wither at that time. “Fate was a very thriving community until the war years, the 40s,” said Doris Cullins, a former teacher and Fate student who now has a Rockwall school district elementary school named after her and who is a member of the Fate Girls. The Fate Girls is group of women who went to school in Fate, grew up in Fate who meet monthly who have created a historical museum filled with sports jerseys, pictures and other items from the Fate school at the Fate City Hall. “Our men went off to war, and they didn’t come back to Fate. People began to work in factories and what not. Cotton had been king, and then it was no longer king. The farming community was disappearing.” The Fate School slowly began phasing out. Grade levels were dropped from the curriculum, moving upper level students to either Rockwall or Royse City schools to finish their education. Finally, the school was closed for good in 1949. “The school went through the first grade through grade 11 a long time ago,” said Jo Leonard, who hosted the Fate School get-together and reunion. “They finally started whittling down on it. When I first I went there it went through the ninth grade. “They had taken the others off, and you had a choice of going to either Rockwall or Royse City. When I graduated from the seventh grade, they took the eighth and ninth (grades) away, so I graduated from Rockwall High School.” Billie Stevenson, another Fate alumnus and member of the Fate Girls went on to teach in the Rockwall Independent School District. She recalls the quality of education Fate once had. “I went from the first grade to the sixth grade, and then they didn’t have a sixth grade,” Stevenson said. “We had a beautiful auditorium upstairs with a stage. We had music teachers. We had Latin. We had expression teachers (speech and drama). We had a lot of plays and programs. We had a lot of social functions. Our playground was just wonderful, with wonderful equipment.” The memories are kept alive by a small but diligent group that has stayed in the area. “All of us went to Fate school at one time or another,” Leonard said. “The men didn’t get invited this time. Just the cooks. We’ve gotten together a couple of times years before in our homes. We tried to contact every person that we could. I guess Houston is the furthest place anyone has traveled from. We have Jo Alice Mayo who came up from there.” In addition to getting together, some are working to ensure that Fate’s history is not forgotten. “We’d all lived in Fate, and we called ourselves the ‘Fate Girls’.” Cullins said. “Actually now there’s six of us, and we kind of keep Fate going. We’ve started a museum up at the City Hall. By museum, I mean we’ve had to use walls. We’ve kind of created an interest to come back to Fate and look us over.” The group is lobbying for a more permanent reminder of Fate’s past school system. “The Royse City school district is building an elementary school in Fate,” Cullins said. “We’re trying to get them to name it after Miss May Vernon. She taught here for a number of years. “She taught all of us here but one. She left here in ‘45 and went to Austin to live with her sister. She started teaching here in the 20s. She was a wonderful teacher. She came back to Autumn Leaves nursing center in Dallas in the 70s. That’s where she died.” Other than just a school system, the participants at this party can remember a completely different era in the life of this small town. “First of all, Fate was such a small community,” Stevenson said. “We were our world. We didn’t know very much about anything except Fate. What really bound us together was that we went to school together, and then we went to church together too. “This was a union Sunday School. The first Sunday we’d have a Baptist preacher. The second Sunday we had a Christian preacher. The third we had a Presbyterian, then a Methodist preacher. The fifth Sunday was the best of all, because we didn’t have one. “All of our social life was here. The school and the church was our center. We were always together, even on Sunday. Very few people moved into Fate, and very few people moved out. This was for generations. It’s just a tie that we have. We feel like family,” Stevenson said.