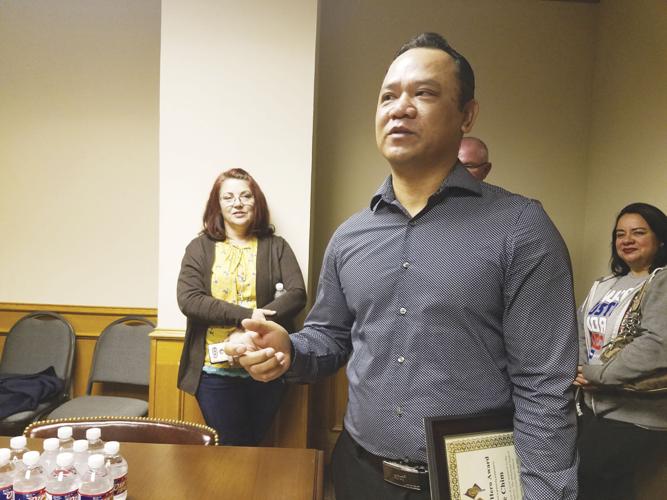 Bruce Chim, the inaugural recipient of the Royse City American Legion’s Tri-County Hero Award, speaks about his experience of escaping the Cambodian genocide. Standing behind him in the yellow shirt is his wife, Adra. 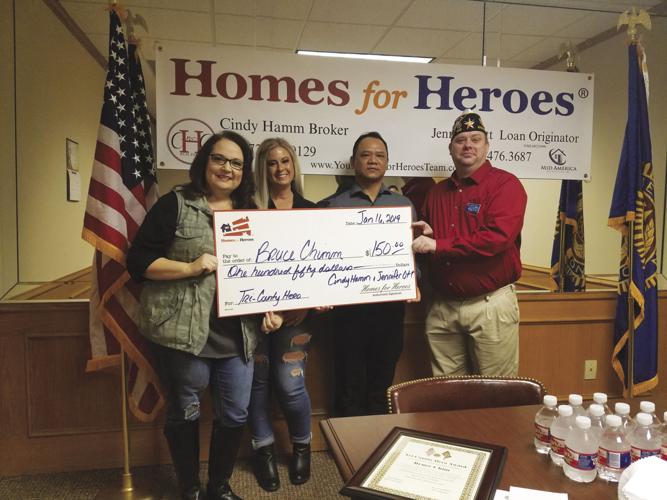 Bruce Chim, the inaugural recipient of the Royse City American Legion’s Tri-County Hero Award, speaks about his experience of escaping the Cambodian genocide. Standing behind him in the yellow shirt is his wife, Adra.

The award was conceived as a recognition that the organization can give out to first responders, military service members and veterans in the area who make an impact on their community.

Chim is a member of the U.S. Army and is currently stationed in Fort Hood in Kileen, Texas. He has also been a police officer.

His story, however, starts many years before he put his life on the line for the country and served in Iraq. It started in a small southeast Asian country called Cambodia.

Chim escaped the horrors of the Cambodian genocide in the 1970s at the young age of five, to run from the Khmer Rouge, a radical communist regime under despot Pol Pot.

Under the despots regime, historians estimate that 2 million, roughly a quarter of the Cambodian population was killed in what is now infamously known as the “Killing Fields.” Other historians have reported that there are many more whose deaths were not accounted for.

His mother and father dropped off Chim and his older brother, Nok, in the city of Battambong when conflict in the capital city of Phnom Penh was escalating. After traveling more than 200 miles through the jungles of southeast Asia toward Thailand, Chim made it to the U.S. when he was eleven years old.

“I found out they were still alive in 2006, but I don’t even know them. I can’t even say if they really are my parents. It’s kind of hard,” he said.

Chim and his brother moved from one refugee camp to another for five to six more years near the border of Thailand. Responding to a wave of refugees fleeing the genocide, Thailand began closing camps one-by-one.

Along the way to Thailand, Chim said he and his brother had already witnessed some of the most gruesome and horrifying images that still stays with him today.

With the help of his aunt and uncle, Chim said, he and his brother were able to get processed in order to come to the U.S.

“The way over here, I remember, was grueling. At first, we went to Bangkok to catch a plane to Hong Kong,” Chim said, as he recalled how fascinated he was with all the traffic in the bustling city. “From there we went to Tokyo and we got flown over to LAX, and I ended up in North Dakota.”

Chim said he still remembers seeing the snow in North Dakota, where he was adopted by his aunt and her American husband.

Through their love and guidance, Chim said he learned the values that inspired him to serve his country later in life.

“As I was growing up, I started learning that you have to give back to the country that has given you so much,” Chim said. “I’m just grateful that God has put me in the right place at the right time with the right people.”

Adra Chim, his wife, was at the award ceremony and was visibly emotional during the event. The ceremony was held Jan. 19 at the offices of CGH Team-Homes for Heroes Team, a real estate firm based in Rockwall. Adra Chim is a resident of Royse City.

“I think he’s the most deserving of it. He’s truly a selfless person. He puts everyone’s needs above his,” she said.

Jason Castleberry, post adjutant of the Royse City American Legion, said the award presentation will be a monthly event.

The Homes for Heroes Team, which makes it a mission to help veterans with real estate needs, also provides a $150 check to the monthly Tri-County Hero.

During the award ceremony, Castleberry said he and Chim were actually stationed in the same area of Iraq. He said he was happy to have started what he hopes will become a local tradition.

“We were both together experiencing some of the same experiences from different perspectives,” Castleberry said. “He had such a different path than myself, but we ended up at the same point with the same mission. Now more than 10 years later, we’re here in the Rockwall, Royse City area talking about it.”