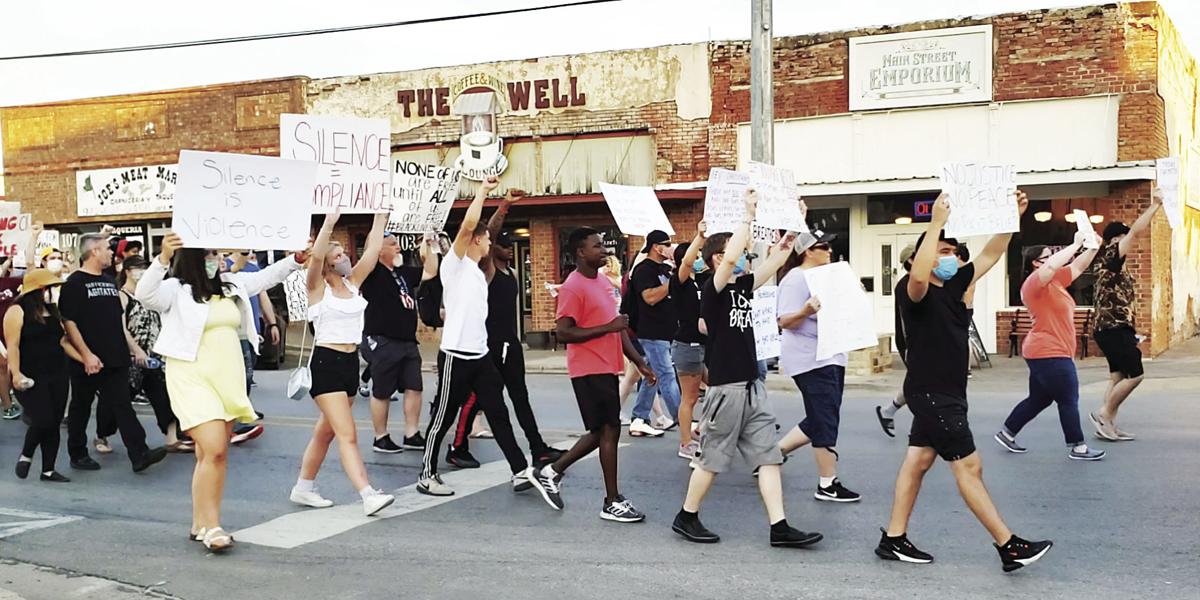 Protestors hold up signs with messages against racism during a protest rally Royse City. 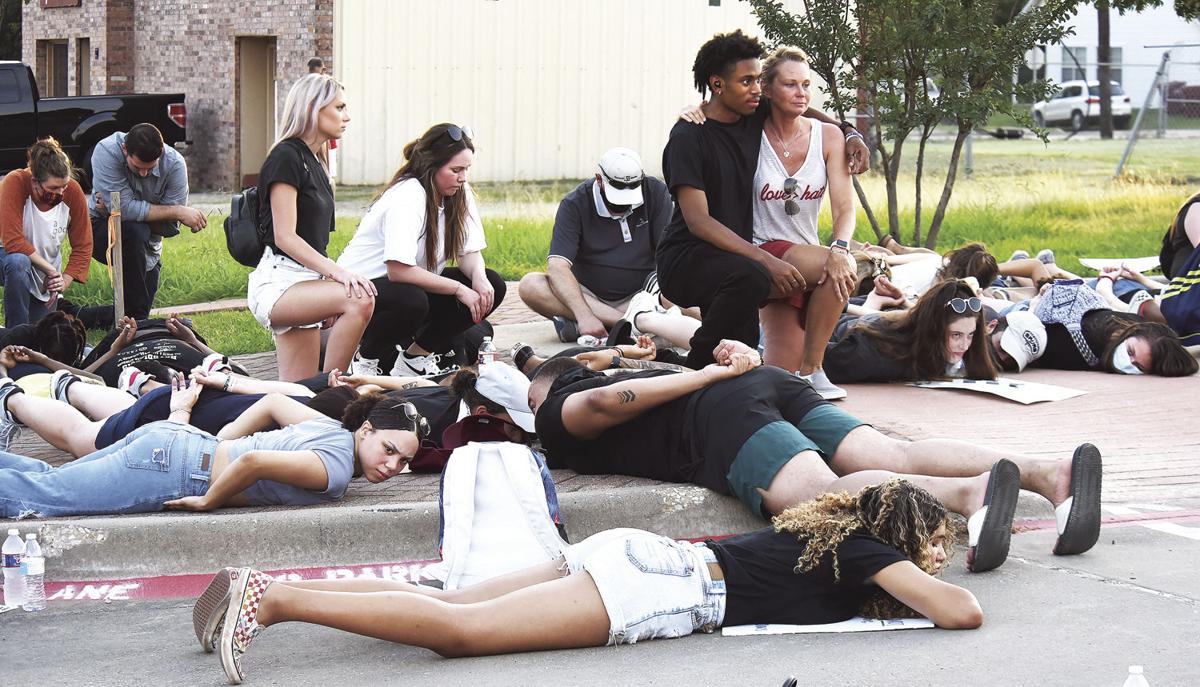 Royse City student Eric Price Jr. and Royse City teacher/coach Tiffany Null hug as a sign of unity during nine minutes of silence as the marchers reflect on the death of George Floyd in Minneapolis. 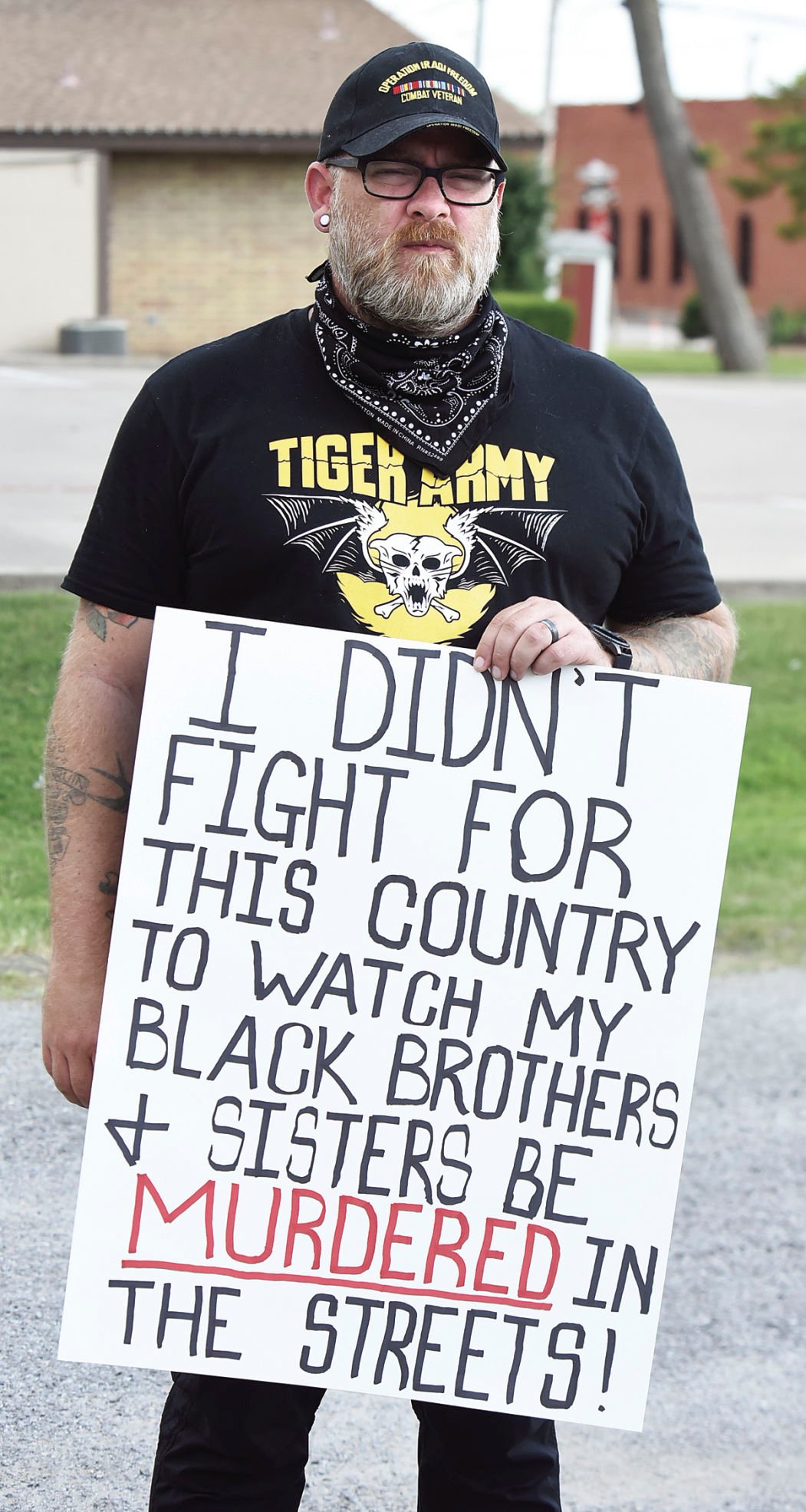 Protestors hold up signs with messages against racism during a protest rally Royse City.

Royse City student Eric Price Jr. and Royse City teacher/coach Tiffany Null hug as a sign of unity during nine minutes of silence as the marchers reflect on the death of George Floyd in Minneapolis.

Several hundred protestors rallied in front of city hall before marching through downtown Royse City on Saturday in a March for Black Lives Matter.

The marchers carried signs that read “No Justice No Peace,” “Black Lives Matter” “Silence = Compliance” and other messages. Many marchers wore masks as they paraded several blocks from city hall to the police station. They then observed nine minutes of silence either on bended knee or lying on the parking lot of the police station, marking the time that a Minneapolis police officer pressed his knee on the neck of George Floyd, causing his death on May 25.

A judge in Minnesota has set an unconditional bail at $1.25 million for former Minneapolis police officer Derek Chauvin, who has been charged with Floyd’s murder.

Organizers called for a peaceful protest and no violence.

Before the march about 10 speakers addressed the crowd from a stage in a parking lot across from city hall.

“I stand with you guys, I understand,” said Royse City Mayor Janet Nichol. “I understand exactly. I think all of us are here tonight because we do understand.

“Martin Luther King said a lot of things but one thing he said is you do not drive hate out with hate. You drive it out with love. The problem today is not really a racist problem. It’s a heart problem. Until the hearts of people change, it will not change,” she said.

Eric Price, one of the speakers, raised concerns about an incident that happened last year with a student wearing a confederate flag at Royse City High School. The flag was eventually confiscated and the student received “consequences in accordance with board policy” as stated by Royse City ISD Superintendent Kevin Worthy in a May 1, 2019, letter addressed to the community.

“My son said, ‘Dad, there’s a guy walking around with a confederate flag in the school.’ And I was like … he got a hankerchief on? He sent me a video and this man had a flag down to his shoestrings. And the teachers did nothing. Six periods my son had to endure looking at this slave flag. Six periods at the country that I fought for,” said Price, who is a veteran.

“I want every race to feel welcome here in Royse City and wherever you go because hate is not allowed any more,” said Royse City High School senior Zariah Pettus. “It’s only love. And if you don’t believe me believe Martin Luther King Jr. who died for all of us.”