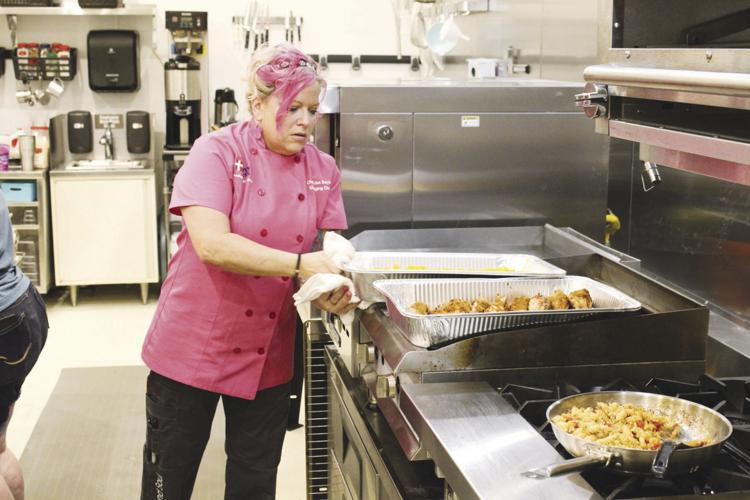 Disaster Managing Chef with Mercy Chefs, Lisa Saylor, has been working with Lonesome Dove Ranch for four years now. For that past three years she would bring her mobile kitchen where she would could meals. During the summertime the kitchen would sometimes reach 125-130 degrees. This year when she arrived to the ranch, the permanent kitchen was installed and ready to use. 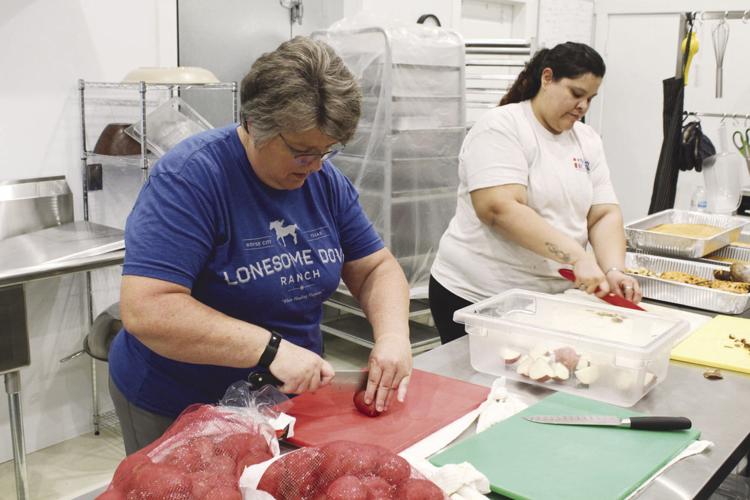 Disaster Managing Chef with Mercy Chefs, Lisa Saylor, has been working with Lonesome Dove Ranch for four years now. For that past three years she would bring her mobile kitchen where she would could meals. During the summertime the kitchen would sometimes reach 125-130 degrees. This year when she arrived to the ranch, the permanent kitchen was installed and ready to use.

A brand new, permanent kitchen at Lonesome Dove Ranch now allows foster children that attend the summer camp to experience food security they might not have had in the past.

The new kitchen, made possible through donations to the ranch and a collaboration with the nonprofit Mercy Chefs, was ready for service in June when campers and disaster managing chef Lisa Saylor with Mercy Chefs arrived to the campground.

“Last year God just really laid it on all of our hearts to come together and create a permanent kitchen here,” Saylor said.

The permanent kitchen allows her and Mercy Chefs volunteers to focus more on the food they prepare as they can make more meals from scratch and spend more time preparing meals, letting them add “a little more love” to those meals.

“Not having to walk out to a refrigerated truck where you climb up the ladder for every piece of groceries and being able to walk in the walk-in fridge really changes what it does to you physically to cook,” she said. “On top of that, it gives us the opportunity to offer things because we aren’t so consumed time-wise, we can put a little more love into it. You can cook more from scratch because you have more time now and you’re not moving everything back and forth.”

For Lonesome Dove Ranch Founder and Director, Bryan Jarrett, the kitchen was “one more dream that came true” through donations from churches and individuals from around the country.

“Last summer we said if there’s any way possible we’re going to pray and dream for a commercial kitchen,” Jarrett said. “Lisa actually brought her truck this summer, not knowing if the kitchen would be finished but when camp rolled around it was ready.”

Before the kitchen was installed in the newly remodeled dining hall, Saylor prepared meals in her mobile kitchen. However, cooking out of a mobile kitchen added challenges that a chef with a full kitchen might not usually think about.

“In the Texas heat, there would be times when our mobile kitchen would reach 125-130 degrees inside. To sustain that for weeks at a time was physically difficult,” Saylor said. “And you’re not battling the bugs. An outdoor kitchen in the state of Texas in the summer is a real bug battle and we’re very much about hygiene and food safety.”

Restaurant-quality cooking paired with Mercy Chefs’ goal of “feeding body and soul” allowed the foster children attending Lonesome Dove to experience affection through home cooked meals that might be hard to come by, Saylor said. On that particular day, the campers were having barbecue chicken legs, macaroni and cheese, cornbread, coleslaw and peanut butter cookies - all homemade.

“We really try to love on these kids with the best food we can because they often don’t get nutritionally balanced food and they’re often food hoarders and there’s a fear of hunger,” Saylor said. “For that really brief moment of their tiny life, we can love on them with a momma and a grandma’s love that they don’t necessarily get out of the situation they’re in.”

For Chef Saylor the opportunities a permanent kitchen provide go beyond food safety and an expanded menu. She sees it as a chance to better connect with the kids that go to the camps as they can stay longer.

“Right now they can stay three nights, but with a full kitchen they are allowed to stay five nights,” she said. “By the third day the kids are starting to relax. These are troubled kids. These are kids that really are wounded. Keeping them longer where you can build the trust and get them to let their guard down, you know there are kids that have been bounced. They’re survivors and it takes a little while to win their trust.”

The permanent kitchen is another feature of Lonesome Dove Ranch that allow Jarrett, Saylor and countless volunteers focus on providing an intensive, hands-on week for campers; not just through helping the kids feel food security, but allowing them to focus on the activities the camp offers them.

“The environment will often dictate the environment of people, so when you can create an environment that represents the heart of what you’re trying to convey then everything is elevated so this environment elevates our heart now,” Jarrett said. “We were doing the best we could with what we had but now this is a true reflection of our heart. We want to give these kids the best.”

Jarrett and his family are still working to complete the campground, which they purchased in 2015. The dining hall still isn’t complete as there are still plans to add on. His goal is to host camps for foster kids all summer, rather than just one month during the summer, so that the camp can reach more kids.

“This is a place where healing happens,” Jarrett said. “We don’t see complete healing in a child in a week, but it’s where it starts. We open their heart for the process of healing to begin.”