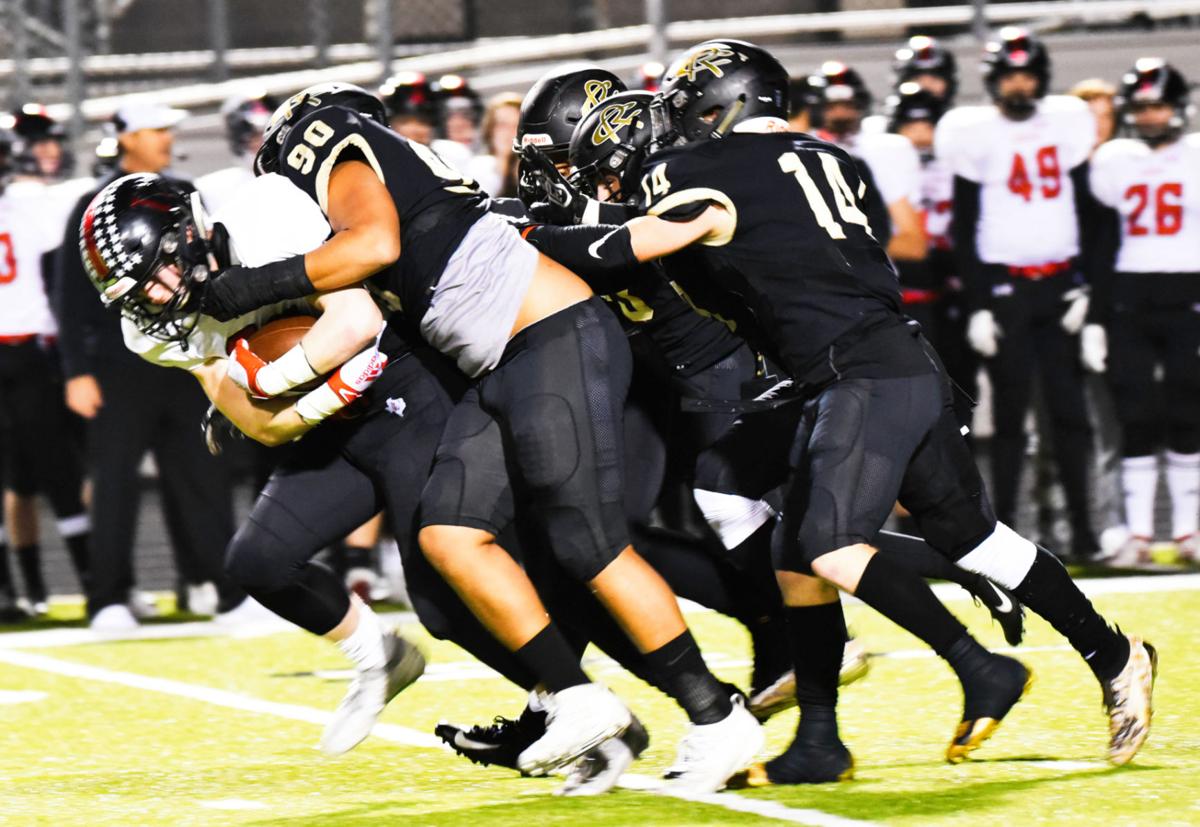 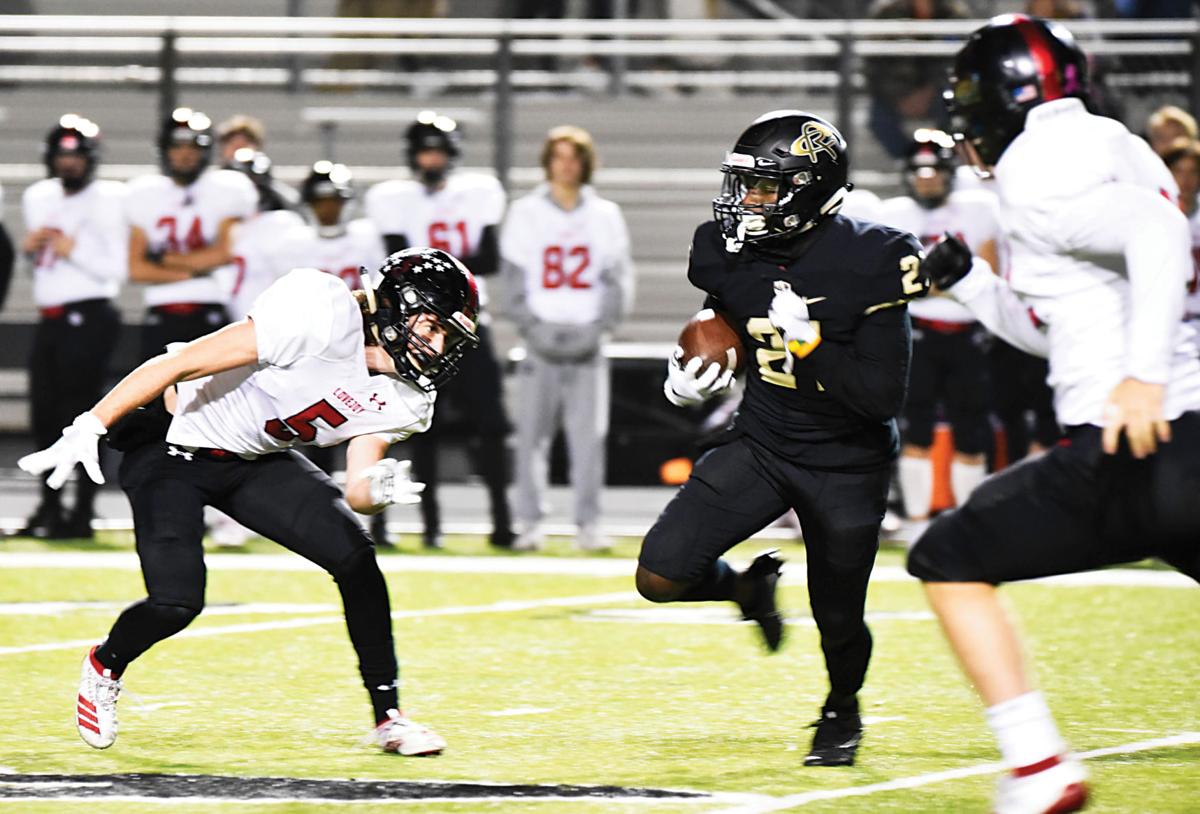 Ahmon Petty-Dozier runs for more yardage during the Royse City Bulldogs' 42-21 bi-district win over Lucas Lovejoy on Friday. Petty-Dozier rushed for more than 100 yards to pass the 1,000-yard rushing mark for the season.

Ahmon Petty-Dozier runs for more yardage during the Royse City Bulldogs' 42-21 bi-district win over Lucas Lovejoy on Friday. Petty-Dozier rushed for more than 100 yards to pass the 1,000-yard rushing mark for the season.

Last Friday the Royse City Bulldogs captured their first postseason football championship in the past 12 years.

The Bulldogs defeated the Lucas Lovejoy Leopards 42-21 in a Class 5A, Division II bi-district playoff game before a large home crowd at Royse City ISD Stadium. Not since the Bulldogs defeated Frisco Wakeland 21-14 for the bi-district crown in 2007 has Royse City played more than 11 football games in a season. And now the Bulldogs advance to the area round and face the No. 1 state-ranked Aledo Bearcats at SMU’s Gerald J. Ford Stadium this Friday at 7:30 p.m..

This is only the second time the Bulldogs have played Aledo. The first meeting was in the playoffs 52 years ago when the Bearcats and the Bulldogs played for the bi-district championship in Greenville on Nov. 17, 1967.

For some it was an upset, for others, the Royse City Bulldogs were a slight favorite to beat the Lovejoy Leopards. The first quarter went to Lovejoy as the Leopards took a quick 14-0 lead off of two Royse City mistakes.

The Bulldogs jumped offsides on a fourth-down failed field goal attempt by Lovejoy. The penalty set up a 16-yard touchdown pass from R.W. Rucker to Noah Naidoo.

The second miscue by the Bulldogs was a fumble that was recovered by Lovejoy on the Royse City 8-yard line, resulteing in a 7-yard touchdown run by Rucker. The two successful PATs by kicker Tyler Loop gave the Leopards the 14-point lead.

Royse City Sophomore Ahmon Petty-Dozier kicked it in gear in the second quarter as he was instrumental in a 75-yard drive. Petty-Dozier clicked off gains of 6, 6, 9 and 11 yards to set up a 1-yard touchdown run by quarterback Tyson Oliver. Anthony Ortiz booted the extra point as Royse City trailed 14-7.

Two possessions later, the Bulldogs recovered a fumble at the Lovejoy 13. Petty-Dozier went to work again and after a 9-yard pickup, the tailback carried the football into the end zone on a 4-yard run to tie the score at 14 all following an Ortiz kick.

The Bulldog defense again set the stage for a Royse City touchdown when senior defensive back Jordan Brown intercepted his first of two interceptions. Royse City again followed in the footsteps of Petty-Dozier as the Bulldogs took possession at their own 43. The sophomore tailback then reeled off runs of 24, 4 and 3 yards before capping off the 57-yard drive with a 3-yard touchdown run with 16 seconds remaining in the first half. Ortiz kicked the extra point as Royse City took a 21-14 lead into halftime.

Two minutes and 12 seconds into the third period and after the Bulldogs received the second-half kickoff, Petty-Dozier took the second handoff and stepped off 18 yards. Six plays later Royse City capped off the 75-yard drive with a 15-yard touchdown run by Petty-Dozier. By this point, the tailback was setting on a game performance of three touchdowns and over 100 yards rushing that pushed him over the 1,000 yard rushing mark for the season and in a bi-district championship football game.

Royse City would continue to capitalize on Lovejoy mistakes as well. Following a 12-yard punt by the Leopards, the Bulldogs regained possession at the Lovejoy 47. Nine plays later, Oliver tossed a 25-yard touchdown pass to Junior wideout Ketron Jackson. Royse City was in command of the game with a 35-14 lead as the third period ended.

Lovejoy capitalized off of a ruling that granted receiver Reid Westervelt as an eligible receiver after being forced out of bounds and then returned to the end zone for a 27-yard touchdown pass from Rucker. With 9:31 to play in the fourth quarter, the Leopards trailed 35-21.

And it was Royse City’s defense again as Jordan Brown caught his second interception of the game and returned it 33 yards for a Bulldog touchdown. With 5:17 to play in the game, Ortiz added the final point and the Bulldogs secured the victory.

This Week’s Games and Predictions

Burleson Centennial at Ennis (At Ennis Friday 7:30) Ennis by 3

Ahmon Petty-Dozier with 130 yards rushing and three touchdowns and recording 1,093 yards rushing in nine games. Petty-Dozier poured on the speed and could not be stopped in the second and third quarters to give the Bulldogs an insurmountable lead.

Defensive Player of the Week

Jordan Brown intercepted two passes and took one back on a pick six for a 33 yard touchdown. Brown was covering Lovejoy’s best receiver Reid Westervelt all game and kept him in check. Lovejoy’s receiver caught one touchdown pass on a questionable ruling, however it was not a consequential reception.

Aledo is the No. 1-ranked Class 5A Division II team in Texas and that is mostly in part to the Bearcats’ incredible tradition as well as their 10-win season. The only loss for the Bearcats came at the hands of Class 6A Denton Guyer, 60-57, in the first game of the season.

Aledo is a prominent fixture in Texas high school football. The Bearcats own eight state championships with the first in 1998 and the most recent in 2018. They are the defending state champions and three of their titles have been at the 5A level in 2014, 2016 and 2018.

Now with all of those accolades, it is still going to be a football game featuring 11 men per team on the field playing against each other. Their best 11 against our best 11 and with those odds, the Royse City Bulldogs are much hungrier than the Bearcats.

Aledo is quarterbacked by Jake Bishop and he is a three-year starter at that position. Bishop is joined in the backfield by Jase McClellan, a 6-0, 200-pound running back with 4.4 speed. McClellan will be wearing the No. 9.  McClellan has been sidelined for all but four games this season. In those four games he has rushed for 542 yards and 14 touchdowns. He has played in the last two games.

Bishop is one of three brothers that have started at quarterback for Aledo.  Each brother has earned a state championship and Jake won his first last season.

This season Jake Bishop has completed 164 of 215 passing attempts for 2,963 yards and 36 touchdowns with only one interception. Bishop will be wearing No. 4.

Earle has also rushed for 11 touchdowns and has had six games with two or more touchdowns.  His best game scoring was six touchdowns, three rushing and three receiving, against Waco University.  He has two games scoring four touchdowns against Everman and Burleson.

So the Aledo stat columns are full and they have a great football team to say the least. Have they played a defense as good as Royse City’s defense? Probably only once or twice. Those two times resulted in an overtime win for Aledo and a game they were down by eight at the half and ended up losing to a 6A football team.

No doubt the Bulldogs cannot afford mistakes. Third down conversions are a key and special teams play can play a big part in controlling field position.

Containing Earle whether it be rushing or receiving will be a huge job.  The speedster is close to the ground, hard to tackle, elusive and just an all-around football player that will be on the field during kickoff returns, punt returns and at least three of every four down possession.

Bishop at quarterback has tremendous pocket presence. He also has speed. At 5-9 he could be pressured by some of the Bulldog defensive linemen and the Royse City corners will need to contain.

Royse City needs to keep it close every quarter. The Bulldogs’ kicking and punting games are excellent and keeping the Bearcats back to the wall could be a deciding factor.

No doubt the Royse City Bulldogs football team never gives up. There has not been a game this season that the Bulldogs were not in or fighting their way back. That is something that Aledo cannot prepare for, because if Royse City never quits, the Bulldogs are always a threat to come back.

Royse City has a tremendous football team that has played with a purpose all season. That purpose is to succeed. Personally, I really believe that this Royse City team could play with any team in any classification.    The Bulldogs have experience and leadership that also will keep them coming either offensively or defensively. Look for the Bulldogs to open some eyes this Friday night. A victory is waiting and the Bulldogs are going to grab it, if anything to show the high school football world they are ready to take a giant leap forward and make their mark in history.