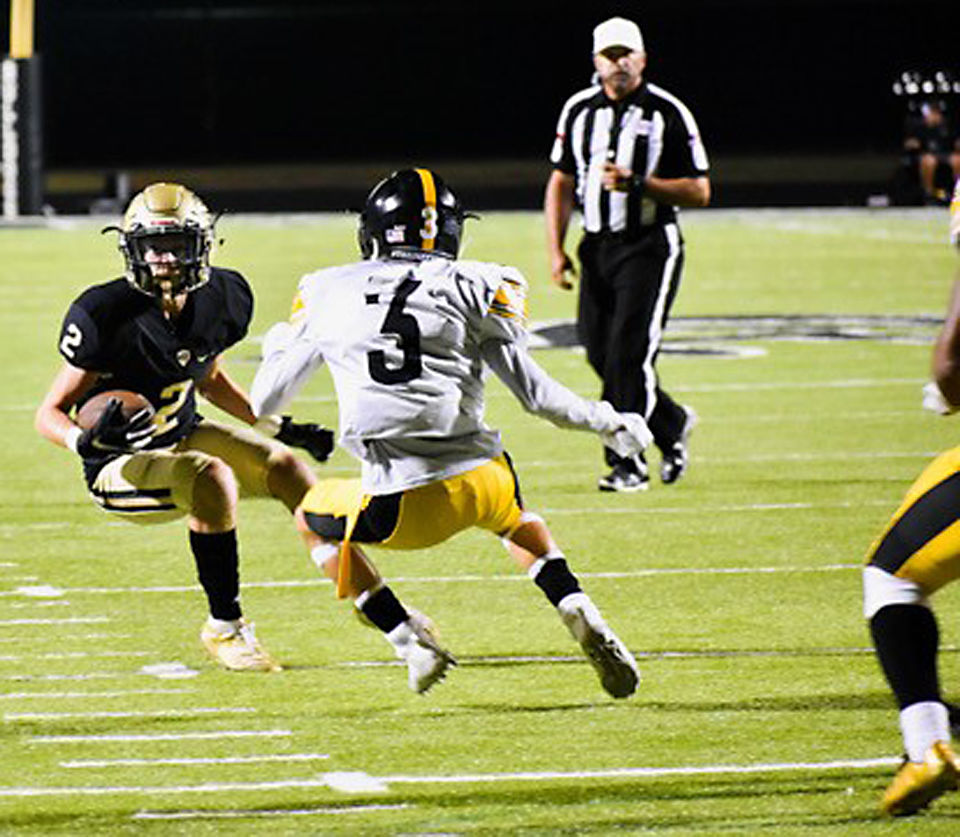 The Royse City Bulldogs extended their winning streak to eight games with a 34-7 District 8-5A-II home football victory over Forney on Friday night.

The singer, Johnny Horton, could not have depicted the scene at Royse City ISD Stadium any better than that.

The Forney Jackrabbits held their own in the first quarter, but too much defense, too much Tyson Oliver, too much Payton Petroff, Ketron Jackson, Bryce Martinez, Ahmon Petty-Dozier, Michael Alphin, the Bulldog offensive line and the list goes on. And the remaining three quarters belonged to Royse City.

Petty-Dozier added a 23-yard touchdown run at the 2:27 mark in the second quarter. Oliver then tossed a pass to Dozier and the nimble-footed sophomore dove over the pylon marker for the two-point conversion to give Royse City a 14-0 lead.

With one second remaining on the first half clock, Anthony Ortiz booted a 28-yard field goal to give Royse City a 17-0 halftime lead.

Forney got on the scoreboard in the third quarter with a 1-yard touchdown run by quarterback Campbell Anderson. The extra point was good by Colby Ortega as Royse City led 17-7 at the 6:51 mark of the third quarter.

Oliver added an 18-yard touchdown run with 3:28 to play in the third period. Ortiz kicked the extra point for a 24-7 Bulldog lead.

Ortiz had his number called again as the senior booted a 40-yard field goal with 39 seconds to play in the third period to give Royse City a 27-7 lead.

Royse City added its final points off of a 4-yard touchdown run by Petty-Dozier. Ortiz added the point after for the final 34-7 score.

The Bulldogs travel to Ennis this Friday night. Royse City, now 4-0 for the season and 2-0 in district, will face a powerful Ennis football team with a 4-1 season record and a 3-0 district record.

The Lions depend on the arm of quarterback Collin Drake, who has completed 69 of 106 passing attempts for 1,081 yards, eight touchdowns and three interceptions.

Ennis also depends on the legs and nose for the end zone of Devion Beasley. Beasley averages 7.4 yards per carry and has 386 yards on 52 carries and seven touchdowns. Drake also runs often with 41 carries for 188 yards and five touchdowns.

Drake has an excellent receiver that averages 25 yards per catch. Leylon Spencer has caught 22 passes for 549 yards and five touchdowns. However, 311 of those yards and three touchdowns were in just one game in the Lions’ loss to Bishop Lynch. In the past three games Spencer has been held to 12 receptions and two touchdowns.

Ennis is very impressive defensively.  Other than the loss to Byshop Lynch, the Lions have not allowed any opponent to more than 14 points and that includes the high-powered North Forney offense.

Royse City continues to be consistently strong on defense and with the addition of a stronger passing and receiving game this season the Bulldogs have been able to open up the rushing lanes.

Ennis gains the home field advantage, and the Lions have played a couple competitive opponents to open their season. Other than that both of these teams are evenly matched.

This is a pivotal game for both teams and a victory for either team could have district championship distinctions at the end of the regular season. The Bulldogs would certainly want that phenomenal fan following to fill up the visitors side this Friday night at Lion Memorial Stadium at 1405 Lake Bardwell Drive, Ennis, Texas 75119.

Offensive Player of the Game

Senior running back Bryce Martinez is our choice this week with 21 carries for 156 yards rushing. This is Martinez’s fourth consecutive 100-yard game this season. Even though the senior tailback did not score, he put the Bulldogs in position to score. Averaging nearly 7.5 yards per carry, the seasoned back kept the Jackrabbits’ defense hopping backwards all night long.

Defensive Player(s) of the Game

Of course, I could have added two or three more, but this week Anderson, Dunbar and Miller take the spotlight.

This week’s schedule and predictions

Sulphur Springs at Forney — Forney by 14

Lakeview Centennial at Wylie — Wylie by 6 (Thursday at 7:00)

Mesquite Horn at Rockwall — Rockwall by 7

Rockwall-Heath at Mesquite — Mesquite by 21

Argyle at Sanger — Argyle by 21

Midlothian at Aledo — Aledo by 8