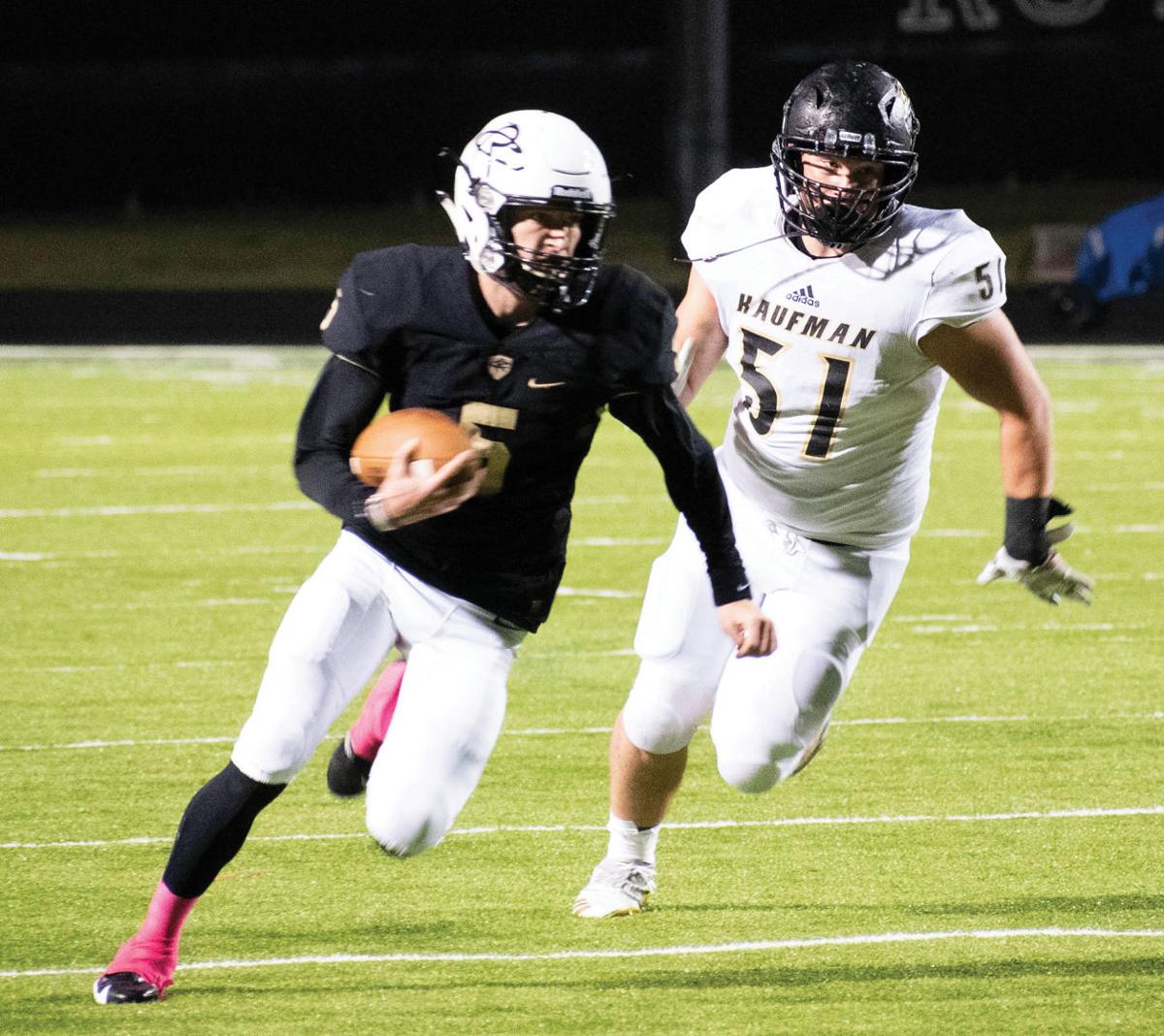 Royse City quarterback Tyson Oliver turns the corner on this carry for the Bulldogs in a recent home game. 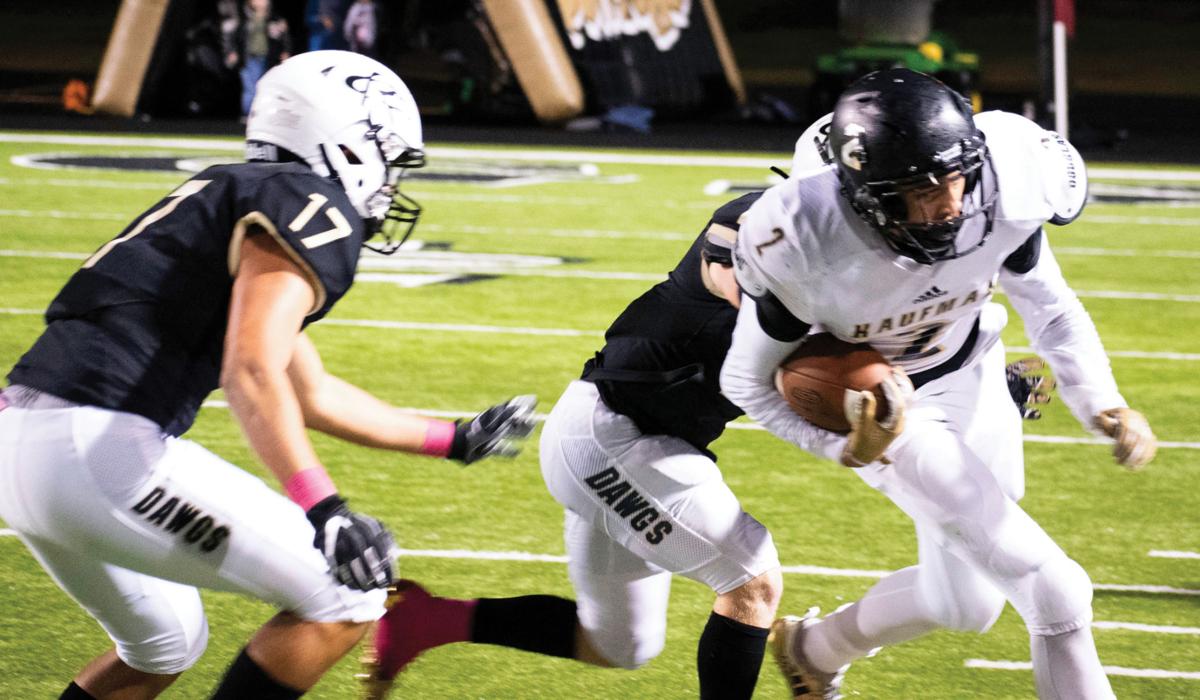 The Royse City defense converges on this Kaufman ball carrier.

Royse City quarterback Tyson Oliver turns the corner on this carry for the Bulldogs in a recent home game.

The Royse City defense converges on this Kaufman ball carrier.

It was the Bulldogs’ last road game of the regular season and the only explanation for North Forney to score 35 points in only one and a half quarters was that the Falcons caught Royse City off guard and maybe looking ahead to clinching their first playoff spot since 2011.

The Bulldogs turned the ball over early and it was costly as North Forney’s DeMarcus Kirk intercepted Royse City quarterback Tyson Oliver’s pass on the Bulldogs’ first possession and on Royse City’s  second offensive play of the game. Kirk scampered 55 yards for the Falcon touchdown and that spark lit a fire under the North Forney offense that would rage out of control for  most of the first half.

Falcon quarterback Jacob Acuna scored next on a 34-yard run at the 5:56 mark of the first quarter.

Acuna capped off the next Falcon possession with a 3-yard touchdown run and with 56 seconds remaining in the first quarter, North Forney scored again on a 59-yard touchdown pass from Acuna to Nick Booe.

The Falcons continued the onslaught in the second period as Acuna struck again and this time it was a 30-yard touchdown pass to Booe.

The Royse City 11 also found the key to its offensive ignition and drove to the Falcon 19-yard line, where Ahmon Petty-Dozier slashed his way in for a Bulldog touchdown with seven seconds remaining in the first half.

Down 35-7 at the half, the Bulldogs struck back with a vengeance in the third quarter. With just over two and a half minutes elapsed in the third period, Oliver ripped off a 42-yard touchdown run.  Anthony Ortiz added the extra point.

Another two minutes later and Petty-Dozier raced 54 yards for another Bulldog score. Ortiz connected again for the point after.

Before the third quarter was complete the Bulldogs capped off another quick Royse City drive with a 2-yard burst up the middle for a touchdown by Payton Petroff.  Ortiz scored the PAT again and the dreams of a comeback were quickly becoming a reality.

Moving the ball all the way down to the North Forney 4-yard line and facing fourth down with 6:29 to play in the final stanza, the Bulldogs called on Ortiz again as Royse City elected to kick a 21-yard field goal. With the successful kick the Bulldogs had almost made up the difference, trailing 35-31.

Another interception by North Forney however stopped the Bulldogs’ next drive inside the Falcon 30. A couple plays later, Falcon Kam Allen caught a 65-yard touchdown pass from Acuna.

On the Falcons’ next possession, Acuna completed his star-studded game, running 71 yards up the middle for the Falcons’ final touchdown.

But the Bulldogs were not giving up and Royse City furiously followed the footsteps of Petty-Dozier.  Oliver succinctly tossed a 32-yard touchdown pass to Petroff, who sidestepped two Falcons into the end zone for   Royse City’s final touchdown. Oliver ran in the two-point conversion, but it was really too little to overcome that first quarter rally by the Falcons.

Now Royse City must win its final game of the year to make the playoffs. Not since 2011 when the Bulldogs entered the playoffs with a 2-8 record, has Royse City come so close to a playoff position.  And with a win this Friday over the Terrell Tigers (1-8, 1-6) the Bulldogs can enter postseason play with an 8-2 record.

This Friday is a huge night for Bulldog Football. It is senior night, the last home game of the season and a victory would give Royse City a playoff spot. Actually a second-place seeding and the opportunity to host their first playoff game at home at Royse City ISD Stadium. Parents and fans are highly encouraged to help fill the stadium for a 7:30 kickoff.

Ahmon Petty-Dozier is just a sophomore. The Bulldog running back has accomplished an amazing season and although Dozier has only played in seven games this season. He is knocking on the door for a 1,000-yard rushing year to go along with seven touchdowns. The talented tailback sits at 914 yards rushing through last week’s contest. Last week, against North Forney, Dozier carried the ball 31 times for 300 yards and two touchdowns.  Breaking off multiple long gains including a 57-yard touchdown run, Dozier was exhausted as he led his team on a furious third-quarter comeback. For his efforts, Ahmon Petty-Dozier is our choice for offensive player of the week.

Defensive Player of the Week

Zamien Anderson is one of the best linebackers in all of District 8-5A, period.  No. 20 is the silent assassin lying in wait for anyone trying to cross his path.  Now that is a bit harsh for a high school football player, but Anderson is the man that does his job week in and week out and yet he is not recognized nearly enough. Registering 10 tackles and two thrown for a loss, Anderson led his team on the comeback trail that nearly overtook the Falcons. Anderson is the second-leading tackler on the team with 75 tackles through nine games. Averaging 8.3 tackles per game, Anderson is one of a cast of characters that seal up the middle behind that amazing defensive line. For the senior’s efforts last Friday night, Zamien Anderson is our overwhelming choice for defensive player of the week.

Greenville at Ennis — Ennis by 3

Kaufman at Forney — Forney by 3

Denton Braswell at Denison — Braswell by 1

Lovejoy at Frisco — Frisco by 6

Frisco Reedy at Princeton — Reedy by 3

Lancaster at Woodrow Wilson — Lancaster by 22

Celina at Argyle — Argyle by 14

Sunnyvale at Dallas Roosevelt — Sunnyvale by 30

Rockwall-Heath at North Mesquite —Heath by 1

South Garland at Wylie — Wylie by 10

Even though the Royse City Bulldogs have claimed their most wins since 2010, this season still comes down to the last game of the regular season to secure that playoff spot that has eluded them for so long. Terrell has not had a remarkable year with only one win, but...and yes there are concerns, the Tigers scored 28 points on North Forney two weeks ago.  Terrell lost to Kaufman by one point, they lost to Greenville by 12 points, they lost to Forney by nine points and they beat Sulphur Springs when everyone was healthy on both sides of the ball by two points. That is 50 points separating the Terrell Tigers from being a 5-5 team. An average of just 10 points per game and Terrell is very close to being a playoff contender. Royse City cannot take this team lightly. Teams that have nothing to lose and everything to gain are dangerous football teams.   Much like North Forney just last week, the Falcons threw everything they had at the Bulldogs early and it was enough to place an insurmountable lead on Royse City.

On the other hand, the Bulldogs have a lot to lose now that they have themselves in a must-win situation. It’s not always who you beat, but when you beat them. A win last week by the Bulldogs and the playoff berth was wrapped up, but not now.

Royse City has all the bells and whistles to get the job done and that unfinished business will be completed with a win this Friday. As a matter of fact, if the Bulldogs can win this last home game of 2019, they can still come in second place in District 8-5A.

Terrell always has speed and the Tigers are under a new coaching staff that needs to bring home another win to end their season. DeDe George, the Tiger tailback, rushed for 231 yards and three touchdowns against North Forney. George had touchdown runs of 25, 44 and 54 yards against the Falcons. North Forney quarterback Jacob Acuna who accumulated 475 yards passing and rushing against the Bulldogs but only 90 total yards against Terrell. Now that is a stat worth thinking about.  One player against Royse City did over five times more damage to one of the best defenses in the district than he did against Terrell, a team that has won only one game this season. Terrell also had 360 yards of offense compared to North Forney’s 340 total yards.  The difference maker in that football game was that Terrell turned the ball over five times, losing four fumbles and one interception. This is by far not a gimme football game for Royse City. The Bulldogs will have to play mistake-free, stop the run and focus on every down to beat Terrell. I’m not playing Devil’s Advocate, just putting out some facts that must be considered for a Royse City team that is highly talented and extremely capable of defeating this Terrell football squad. Unfinished business must be finished this Friday night at Royse City ISD Stadium. Senior parent night will begin before 7 p.m. and kickoff is at 7:30. Celebrating this season’s success must wait until the final tick of the game clock and not before making sure that Terrell has been dealt its final loss of the season.