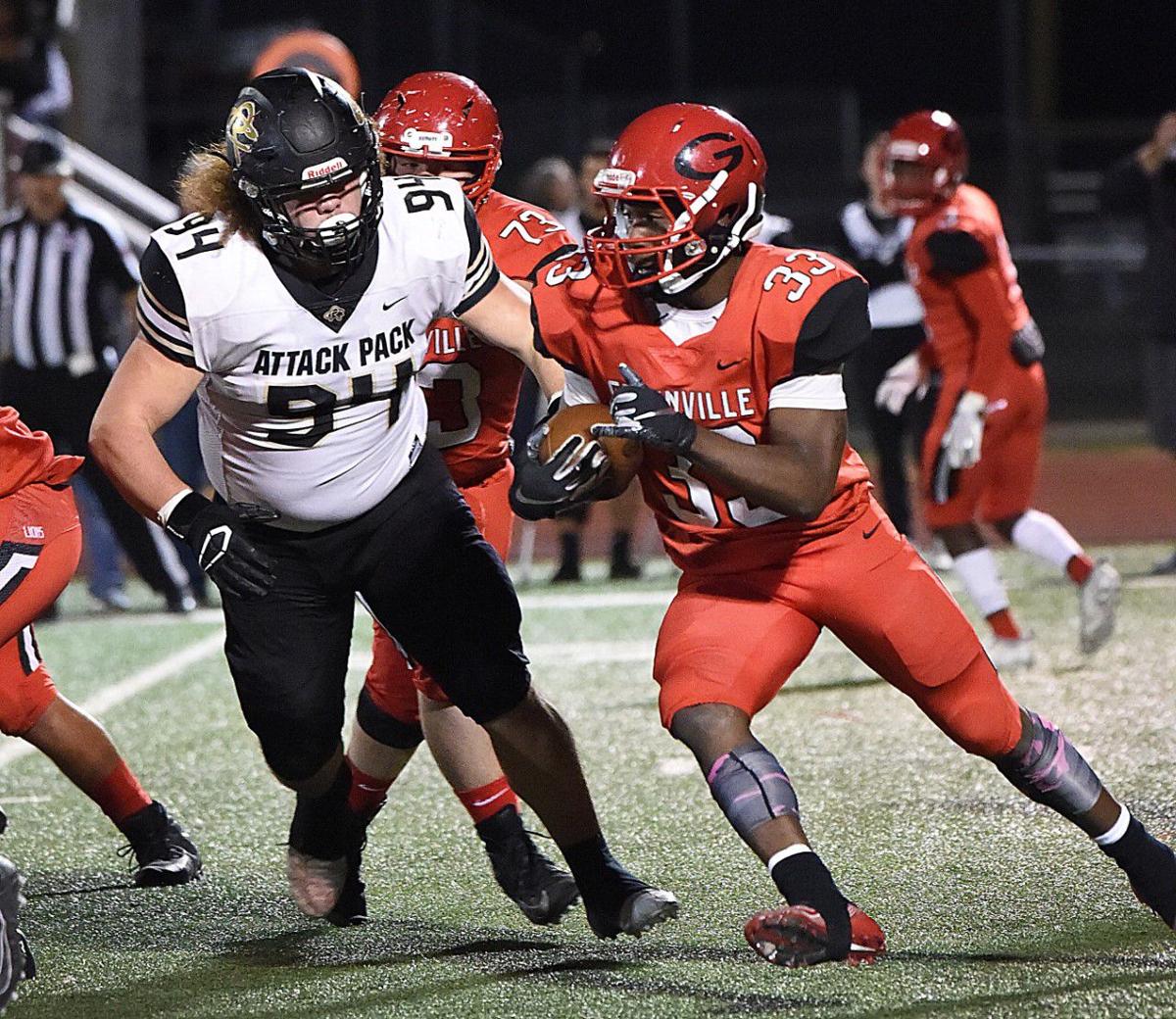 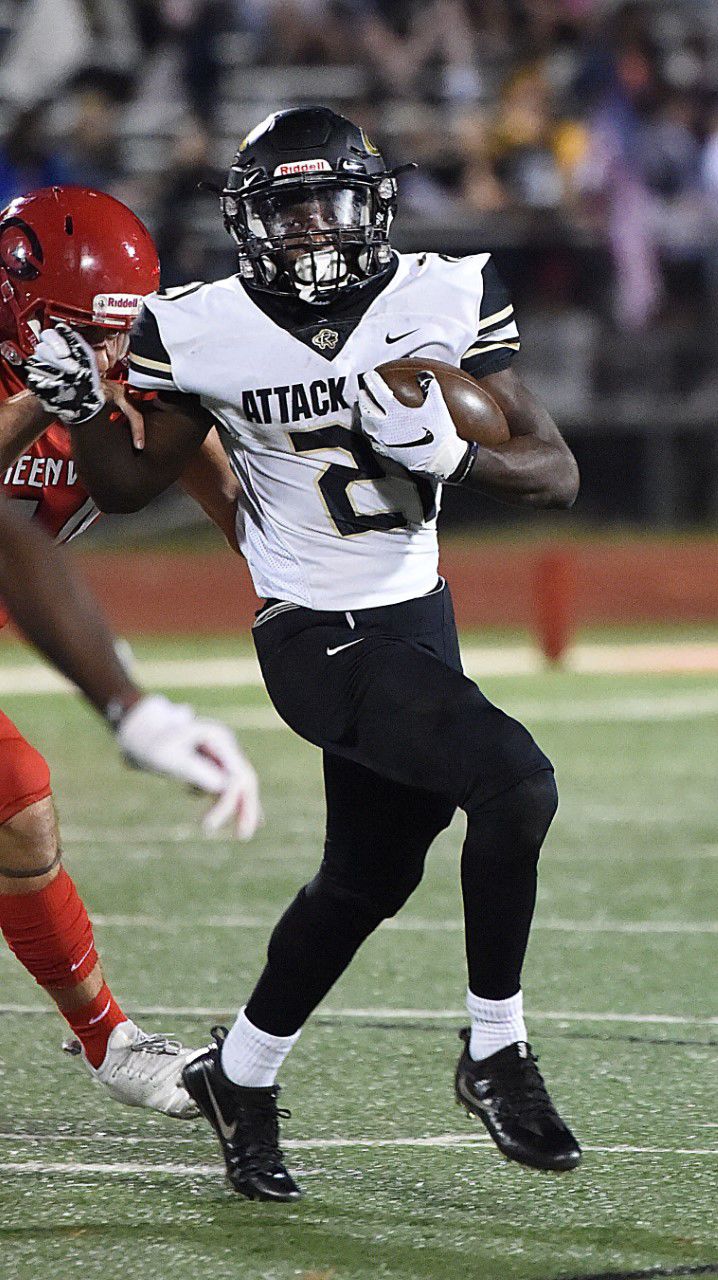 Royse City running back Ahmon Petty-Dozier turns the corner on a carry for the Bulldogs against Greenville.

Royse City running back Ahmon Petty-Dozier turns the corner on a carry for the Bulldogs against Greenville.

The Bulldogs were listed as the favorites to win this one, but the Greenville Lions didn’t get the memo. Greenville’s homecoming was even more incentive to pull off the upset, but Royse City disregarded those festivities to obtain their sixth victory of the 2019 football season. 17-14.

Fumbles, high snaps and penalties were just some of the things you would expect to see in the early season, but they were evident in the early minutes of this game.

Royse City senior John Klump recovered a fumble and then the Bulldogs nearly fumbled the ball away to Greenville when the Lions chased down an errant exchange from the center to Bulldog quarterback.

However, the Bulldogs finally got their offense moving following a Greenville punt and a personal foul penalty on Royse City. The Bulldogs then began their first legitimate drive of the night from their own 8-yard line.   Eleven plays later, Royse City capped off the 92-yard drive with a 2-yard touchdown run by senior fullback Payton Petroff. Anthony Ortiz kicked the extra point for a 7-0 Bulldog lead with 4:59 left in the first quarter.

Greenville responded with a drive that consumed 3:59 off the clock that covered 50 yards and was capped by a 9-yard touchdown run by Lester Turner. Zach Allen added the PAT to tie the score at 7 all with 1:00 to play in the first stanza.

With flags, fumbles and flying footballs all over the field the Lions finally struck again with 1:56 to play in the first half. An 11-yard touchdown pass from Brandon Stephens to Shawn Brown gave the homecoming crowd a 14-7 halftime lead by the Lions.

A 20-yard loss on another high snap gave pause to the Bulldog offense again but the Bulldog defense held on to close out the second quarter.

The Bulldogs gathered themselves during the break and it was that Bulldog defense that gifted Royse City when senior linebacker Zamien Anderson intercepted a pass that would lead to a 33-yard field goal by Ortiz.   With 9:36 remaining in the third quarter, Royse City trailed 14-10.

From this point on it was an all-out battle as both teams butted heads and it was up to the special team’s play to put the Bulldogs back into the role they have been accustomed to this season. Klump signaled to the   Royse City bench on fourth and one at midfield that he wanted to carry the football on a fake punt and he quickly rambled for a 5-yard gain and a Bulldog first down.

Petroff and Ahmon Petty-Dozier churned out valuable yardage and a pass interference call against Greenville added up to 4-yard touchdown run by Petroff.  With :36 remaining in the third period, the scoring in this game was over after Ortiz split the uprights to give the Bulldogs a 17-14 lead.

The final three minutes of the game was an intense exchange of defense from both teams, however it was Royse City’s Jamie Cortez that stopped a serious threat with a 10-yard sack of Greenville’s quarterback on fourth down with 2:34 remaining.

The Lions did get one last shot with 25 seconds left, but a couple of incomplete passes later and Royse City captured the Interstate 30 rivalry trophy for 2019.

Payton Petroff was all in on winning this football game. His determination, his leadership and his talent kept the Bulldog offense churning out approximately 300 rushing yards against the Greenville Lion defense. Petroff contributed 125 yards rushing and two touchdowns to help win the I-30 rivalry contest. Several times in this game, Royse City needed the tough yardage. The kind of yardage that keeps the ball moving downfield. And when that yardage was needed, Petroff’s NO. 3 was dialed up, and he delivered.

​Defensive Player of the Week

his young man could be the DPOTW almost every week. But No. 94, Jamie Cortez, entered this game with a stomach virus and was not up to par for the seventh game of the Bulldog’s season. But Cortez shook off the bug and fought through it all to deliver another stellar performance. As the game progressed so did Cortez.  Taking on two and three offensive linemen every play, it came down to Cortez making the big play in the final minutes to seal the Bulldog victory and he delivered. Cortez mustered all of his strength to corral Greenville’s quarterback for a 10-yard loss with 2:34 to play in the game. That play delivered the overwhelming momentum the Bulldogs needed to gain the win over the Lions.

Corsicana at Forney — Corsicana by 14

Denton Braswell at Princeton — Braswell by 21

Lovejoy at Lake Dallas — Lovejoy by 14

Lancaster at Mansfield Timberview — Lancaster by 3

Crandall at Midlothian Heritage — Heritage by 10

Melissa at Argyle — Argyle by 7

Sunnyvale at Roosevelt — Sunnyvale by 30

Rowlett at Garland — Garland by 3

Mesquite Horn at Rockwall-Heath — Horn by 27

Rockwall at Tyler Lee — Rockwall by 24

The Kaufman Lions are coming off of their first win of the season and it was a close one as the Lions defeated the Terrell Tigers 34-33 with the Tigers on the Lions 1-yard line as time elapsed in the game. It is getting very close to the end of the season for all teams this year. Kaufman’s remaining schedule is at Royse City, Sulphur Springs and at Forney. The Bulldogs host Kaufman, travel to North Forney and host Terrell for the final game of the season.

The Bulldogs are in the hunt for a playoff spot and each victory puts them a game closer to that goal. If the Bulldogs were to secure a playoff spot, Royse City would represent one of the top four playoff positions in District 8-5A Division II.  This district would face District 7-5A-II in the first round. Definitely don’t want to count our chickens before they hatch, but just for fun, the current leaders in District 7 are Frisco (7-1, 5-1), Denison (5-2, 4-1), Denton Braswell (5-2, 4-1) and Lovejoy (5-2, 4-1). Others in that district that are still alive are Frisco Reedy (4-4, 3-3) and Princeton (3-4, 2-3).

The Bulldogs will need to take care of business this Friday night to capture a seventh win this season. That is the most wins the Bulldogs have had in over 10 years.