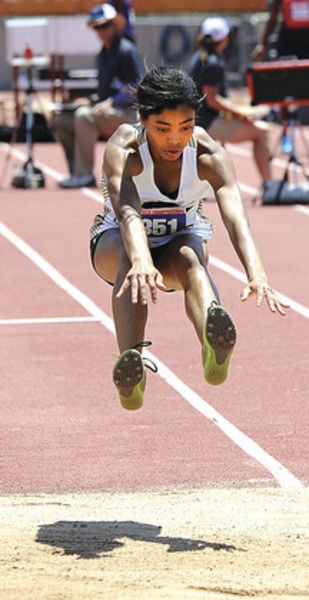 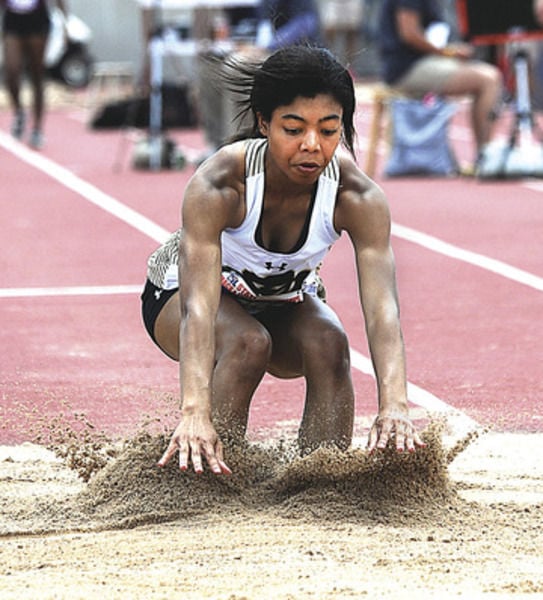 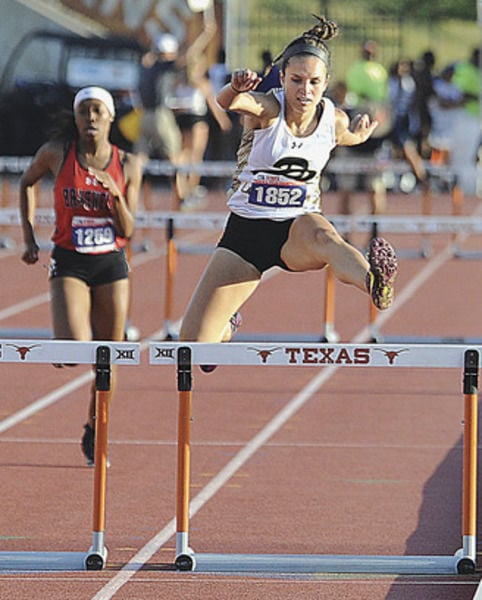 Michaela Travers takes fourth in the 300-meter-hurdles with a time of 44.73 while running lane one.

Michaela Travers takes fourth in the 300-meter-hurdles with a time of 44.73 while running lane one.

AUSTIN — Keeping up with a state-record holder brought out the best in Royse City sophomore triple jumper Kayla Hutchins.

Hutchins earned a bronze medal in the 5A girls triple jump, while teammate Michaela Travers was fourth in the girls 300-meter hurdles on Friday at the University Interscholastic League State Track and Field Championships at Mike A. Myers Stadium.

Moore topped last year’s 5A record distance of 43-4 3/4 with a monster leap of 45-4 3/4 that exceeded the state and national record of 44-2 1/4 set in 2001 by Ychlindria Spears of Luling, but Moore’s mark won’t count as a record because the 3.8-meter aiding wind exceeded the 2.0 standard for record purposes.

Moore was in danger of not advancing to the finals after scratching on her first two attempts. She hit a “safe” mark of 40-7 3/4 on her third attempt to move into the finals, scratched on attempt No. 4 and then popped the big jump on No. 5.

Travers, third last year in the 5A girls 300-meter hurdles, finished one place back this time with a time of 44.73 seconds while running in lane one. Simone Watkins of Frisco was first at 43.41, followed by Brooke Shepherd of Frisco Heritage (43.97).

Travers clocked a 43.91 last year at state and ran a 43.86 while finishing third at the Region II-5A meet behind Watkins and Shepherd. Travers made it to state as a “wild card” with the fastest qualifying time of the of the third-place finishers from the state’s four regions.